Yesterday, I gave a talk about gui-easy at the eleventh RacketCon! You can find a recording of the talk on YouTube and a transcript below. Day two of the conference is starting in a little under a couple of hours so join us if you like! 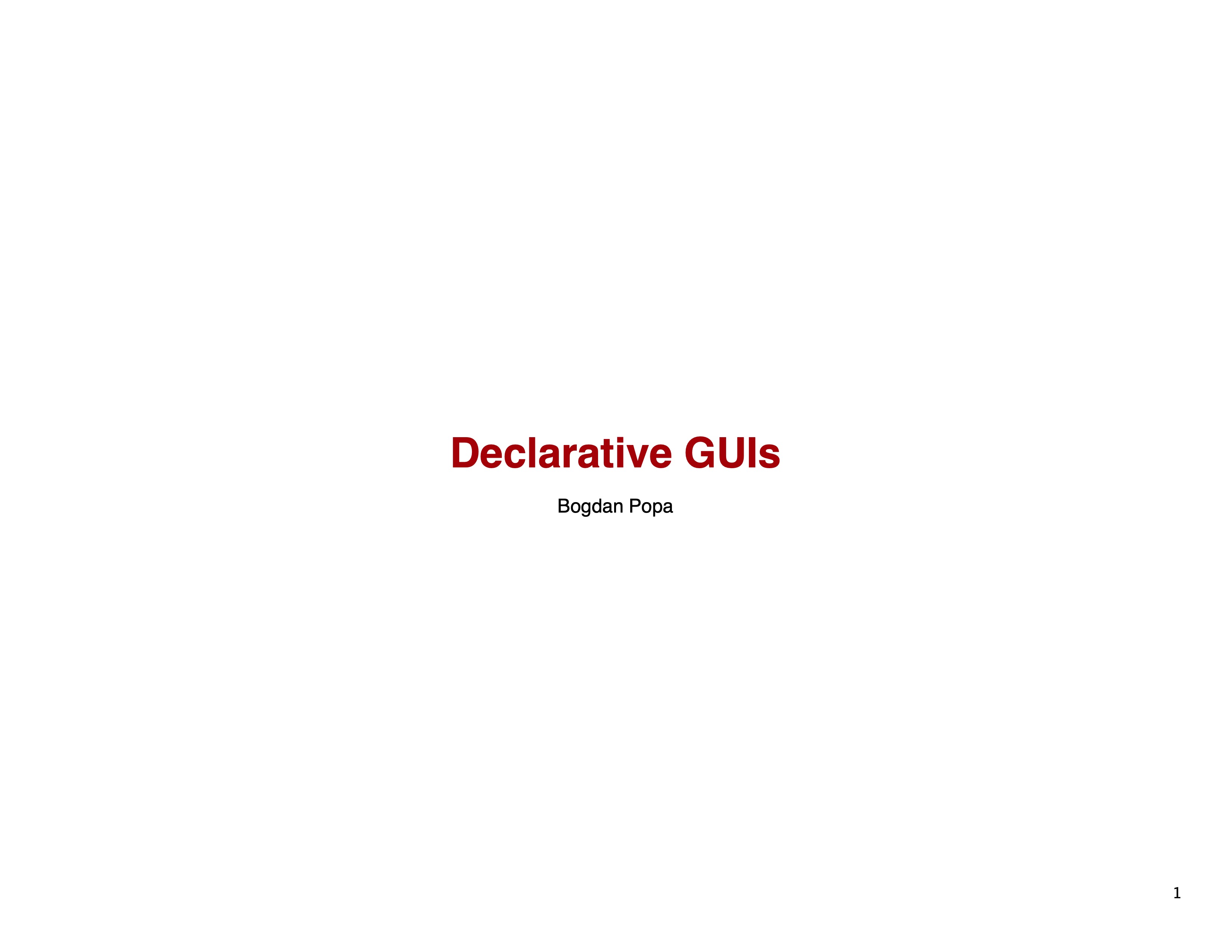 My name is Bogdan Popa, and today I will be talking about gui-easy, a library for declaratively building graphical user interfaces in Racket. 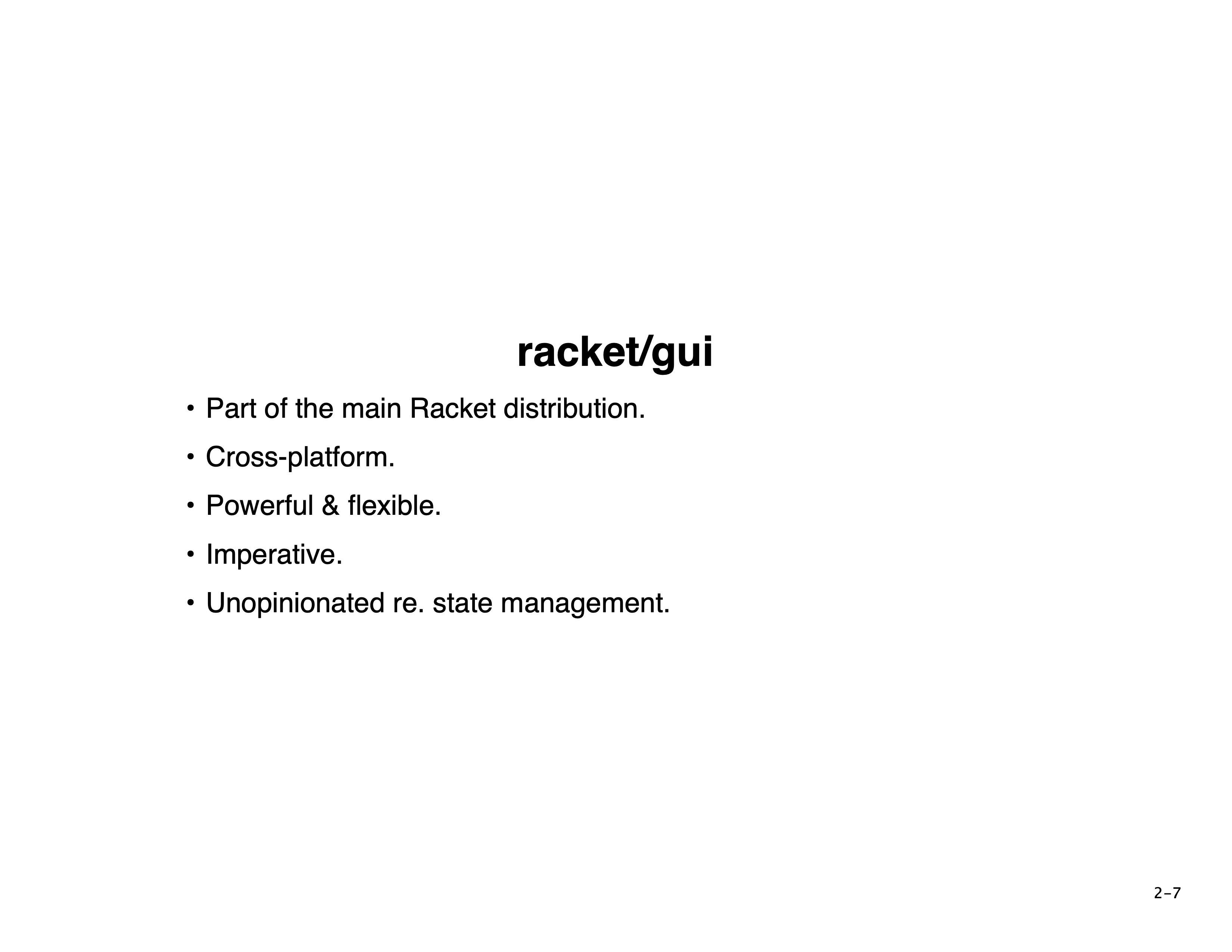 Racket comes with racket/gui as part of its main distribution. The racket/gui library is a toolkit for building cross-platform graphical user interfaces. It’s powerful and flexible, having been used to implement the DrRacket IDE. One of the reasons for that flexibility is that it’s built on top of the racket/class library. The downside of that is that it exposes an imperative API. Additionally, it is agnostic concerning state management, which means it’s up to you to decide how you’re going to keep track of state within your application and how you’re going to keep the GUI and the application’s state in sync. 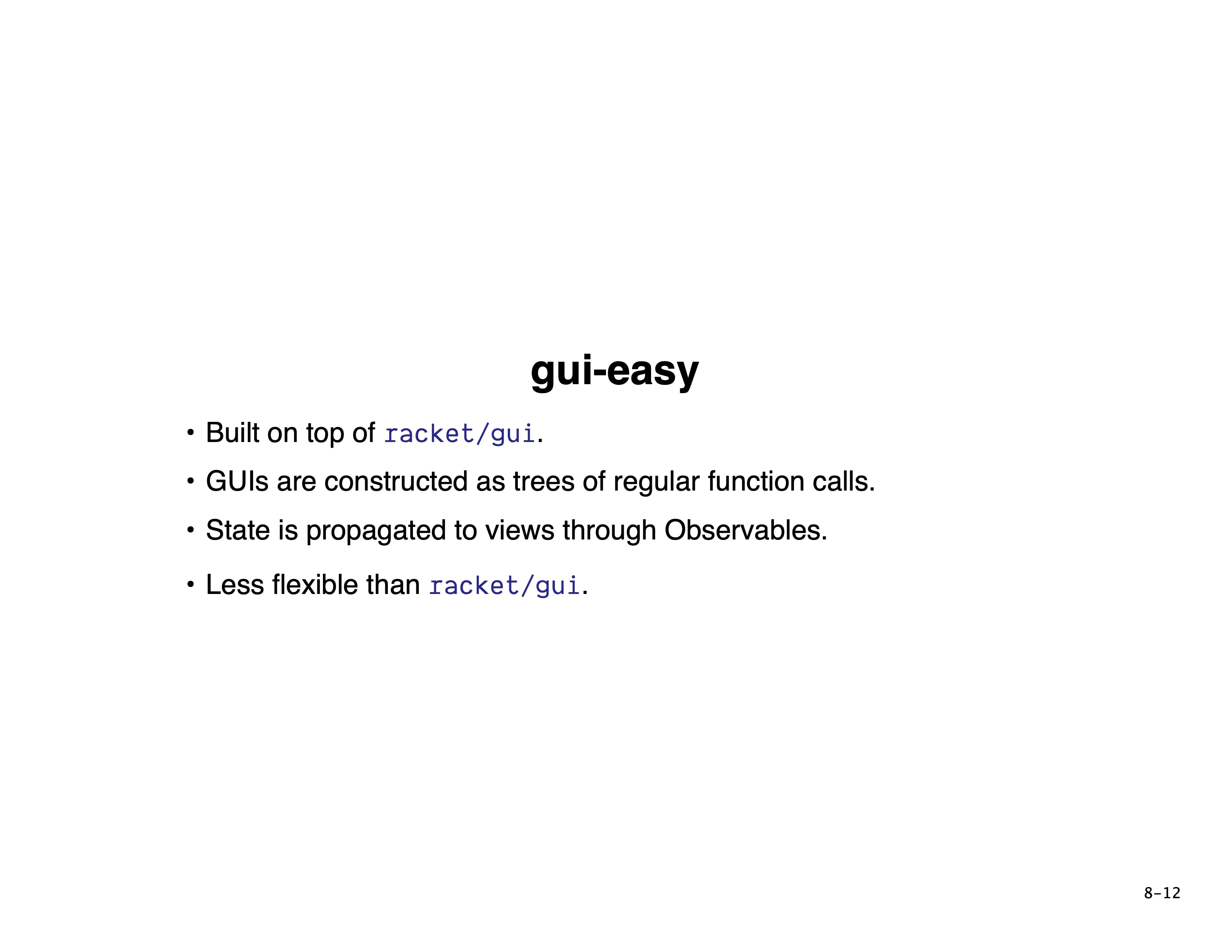 gui-easy is my attempt at adding a declarative layer on top of racket/gui. It achieves this in two ways. Firstly, by hiding the details of the class system from the user so that regular function calls form the view hierarchy. Secondly, by providing an abstraction for managing state and automatically propagating state changes to views. These two properties make it less flexible than racket/gui. In particular, you cannot opt out of its state management abstraction. 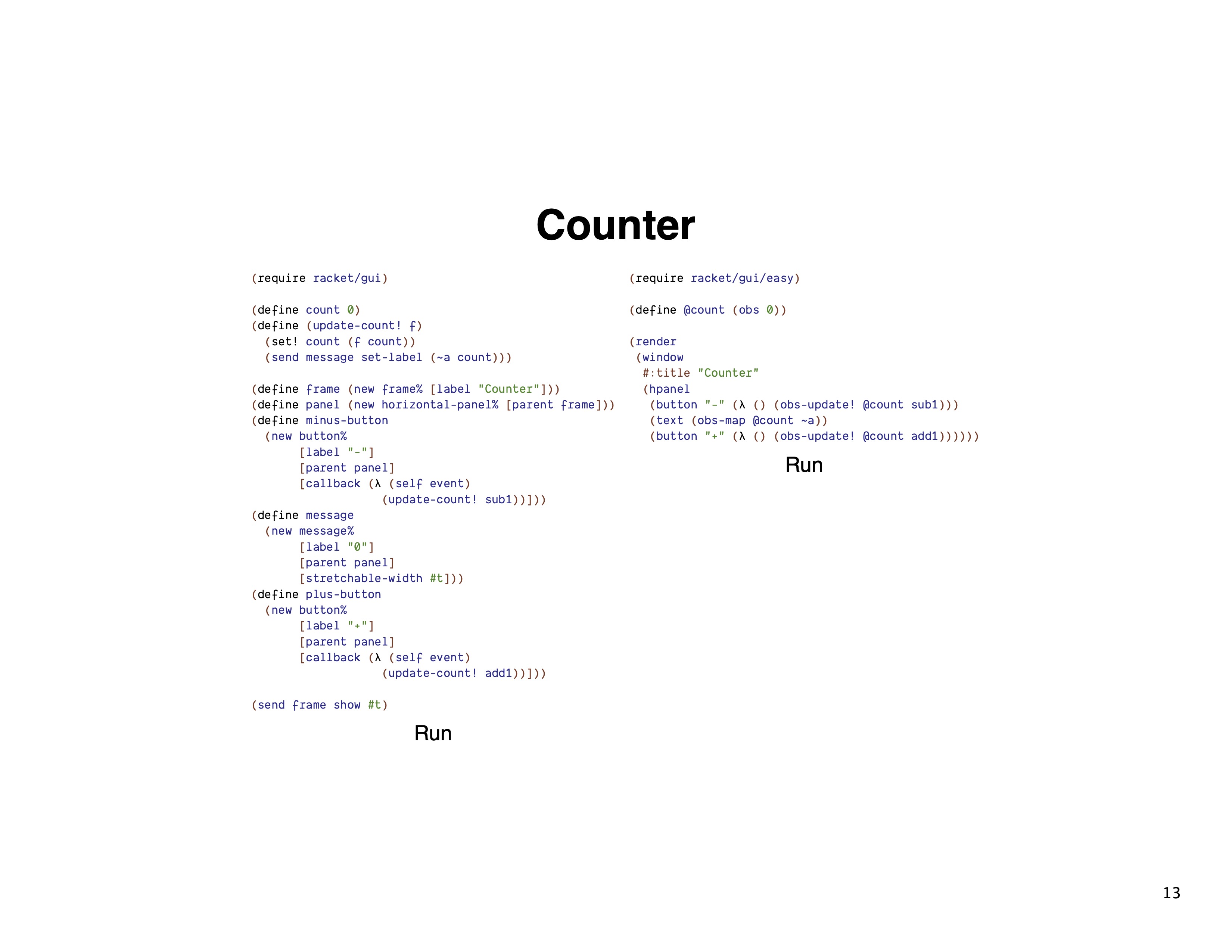 Here is an example application built with racket/gui on the left and gui-easy on the right. I can run both, and both produce roughly the same result.

The racket/gui version constructs the UI hierarchy incrementally by instantiating each widget individually and passing them around as parents of other widgets. The frame holds the panel, and the panel contains the two buttons and the message. In contrast, the gui-easy version has a closer correspondence between the final structure of the UI and the structure of the code. The window holds the panel, which holds the other three views.

The application state is managed in the racket/gui version using a mutable variable and a function that mutates that variable. In addition to changing the counter’s value, the update-count! function is in charge of updating the message to reflect the change.

In the gui-easy version, an observable wraps the counter, and the library takes care of propagating changes to the relevant views (in this case, the text view). 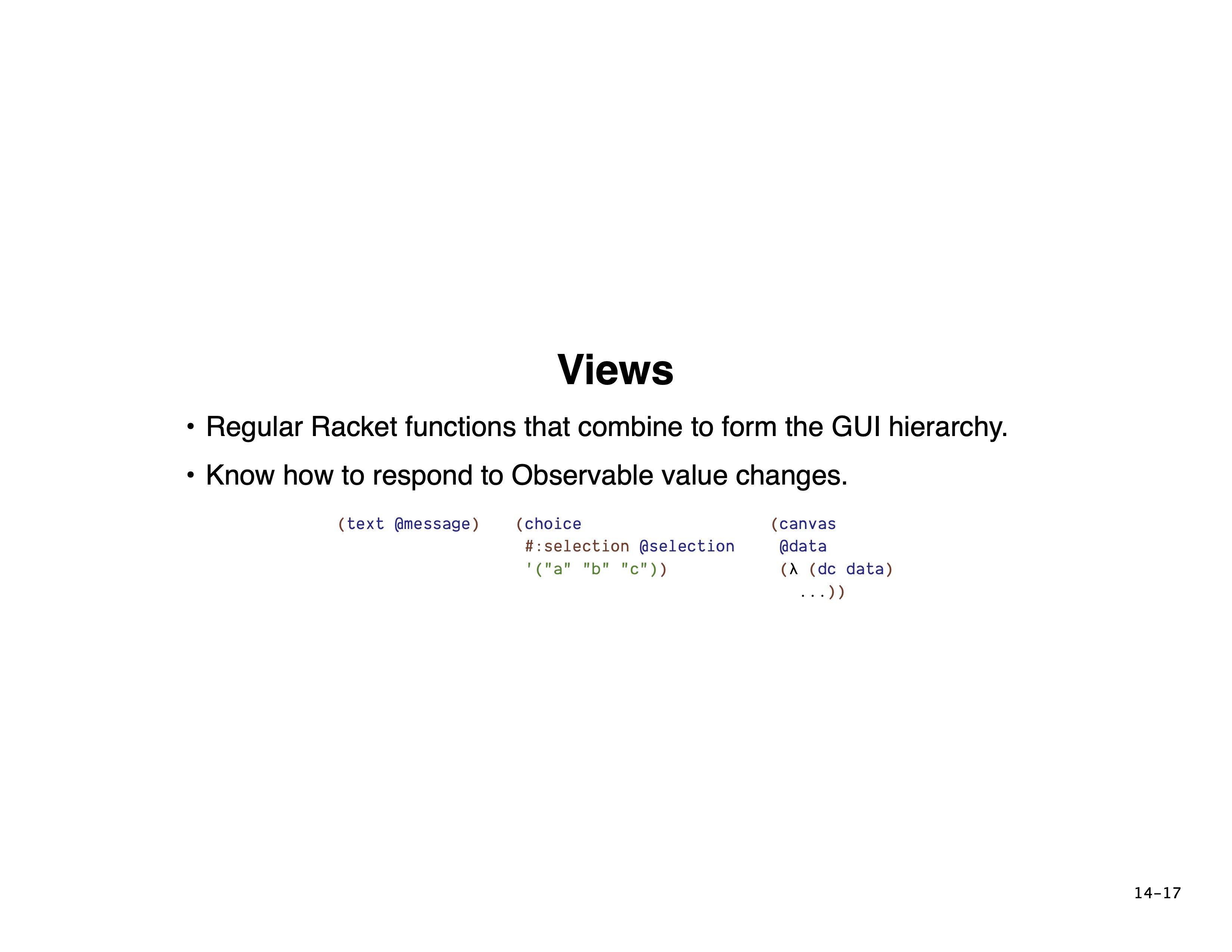 Views are regular Racket functions that combine to form the GUI hierarchy. They know how to respond to Observable changes in ways that make sense for the respective widgets they represent. For example, text views change their text when their input changes. Choice views change their current choice when their selection changes, and canvas views call their draw functions when their data changes. 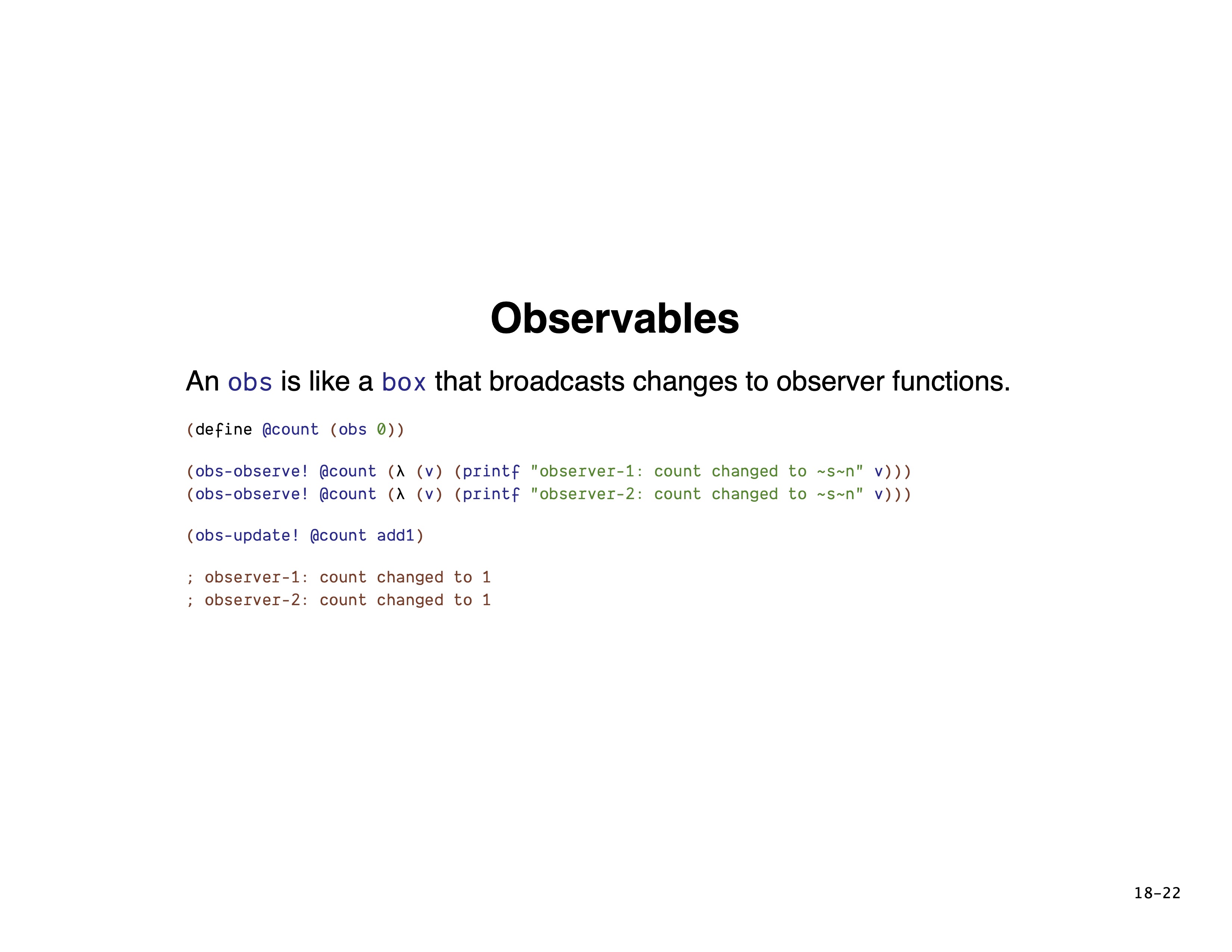 An observable is like a box that can broadcast changes to its contents to observer functions. We can define an observable value, then subscribe a couple of functions to it. When we push a change to the observable, the two observers trigger. In this case, both print the new value of the observable to standard out. 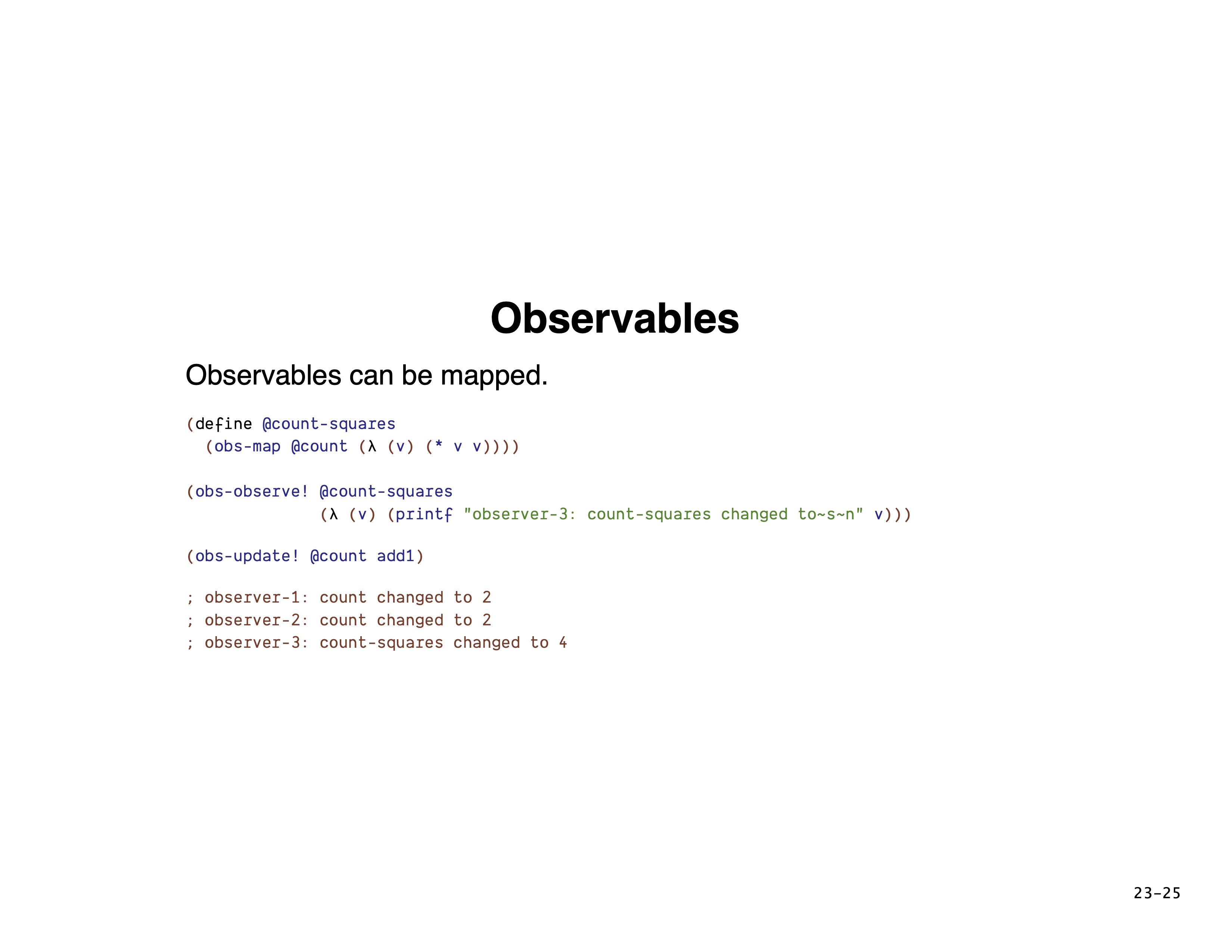 The obs-map function produces derived observables by applying a function to the contents of an existing observable. Just like regular observables, we can observe derived ones. If we push a change to the original @count now, we can see both its observers trigger and the observer we added to the derived one. 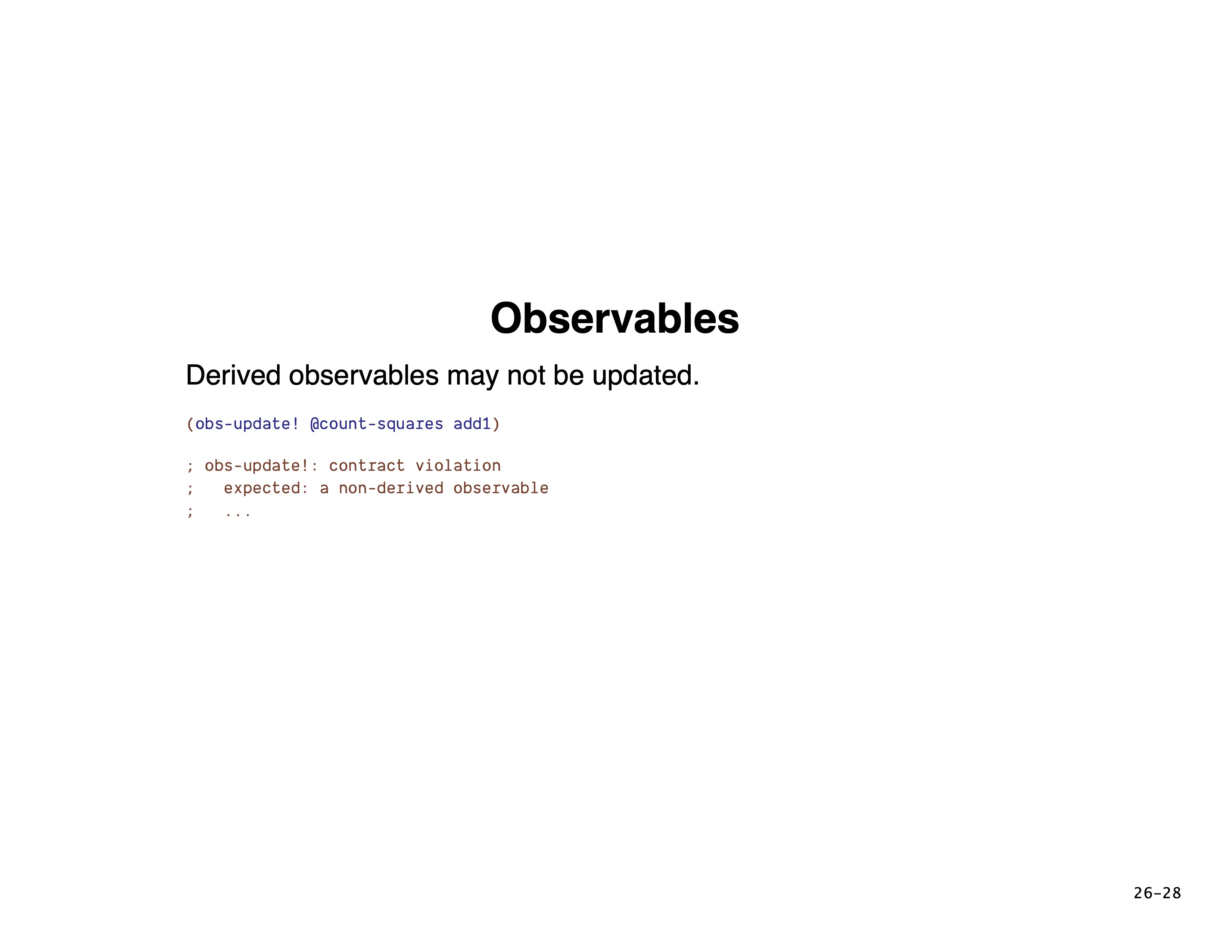 While you can observe mapped observables, you cannot update them. Doing so results in a contract error. 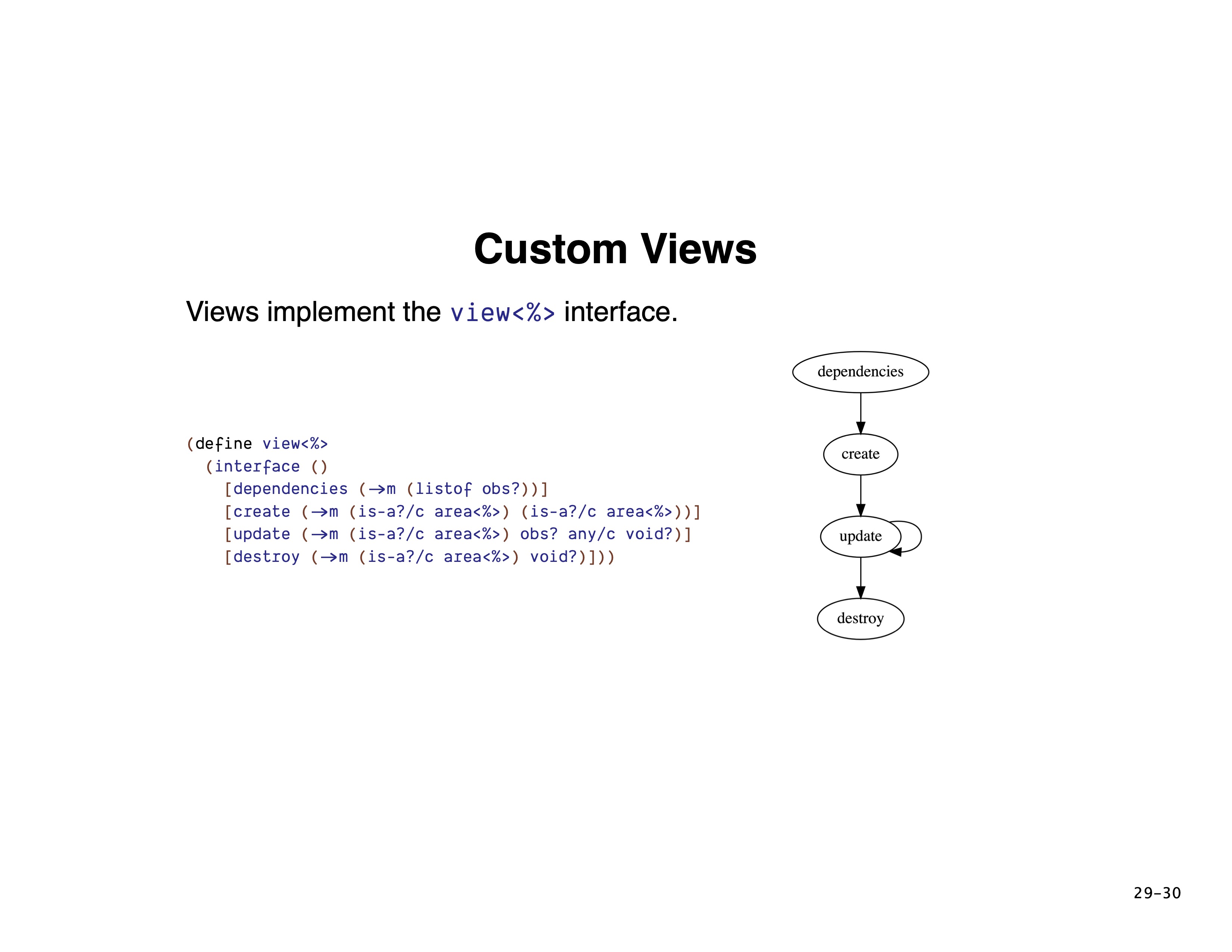 Sometimes you may need to implement custom views. Doing this is straightforward. Views in gui-easy implement the view<%> interface. The interface is just four methods. Every view<%> must be able to list its dependencies. Its create method must instantiate the underlying racket/gui widget. It needs to know how to respond to changes in its dependencies and alter the underlying racket/gui widget. When it’s no longer needed, it can perform any teardown actions it needs to in its destroy method. 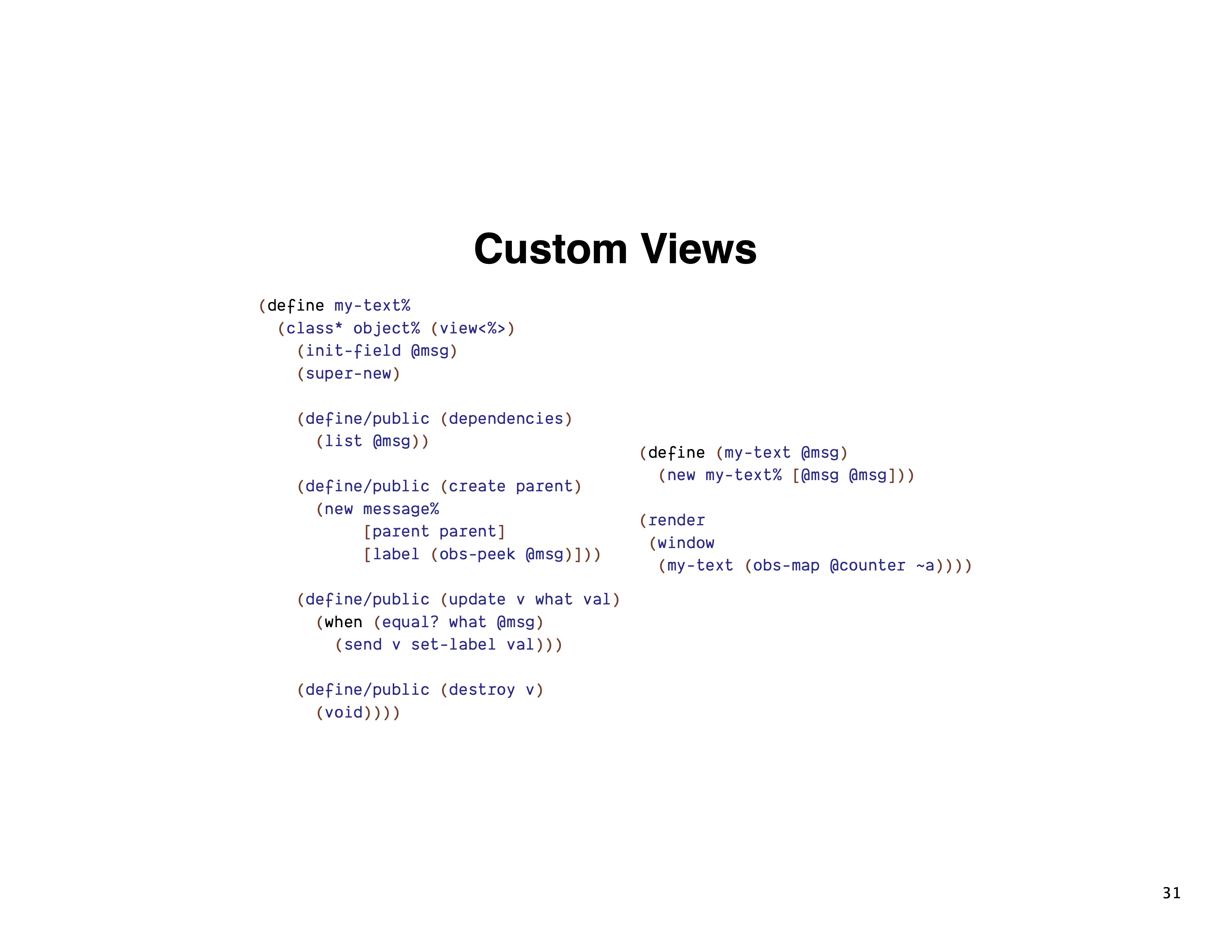 Here is a custom text view. It depends on an observable message. To create the underlying widget, it instantiates a message%. When the @msg observable changes, it updates the label on the message% widget, and it doesn’t need to perform any teardown actions, so its destroy method is a no-op. Once we have the view implementation, we can declare a constructor function to hide away the class details from users, and then we can use the new view just like we would any of the views built into gui-easy. 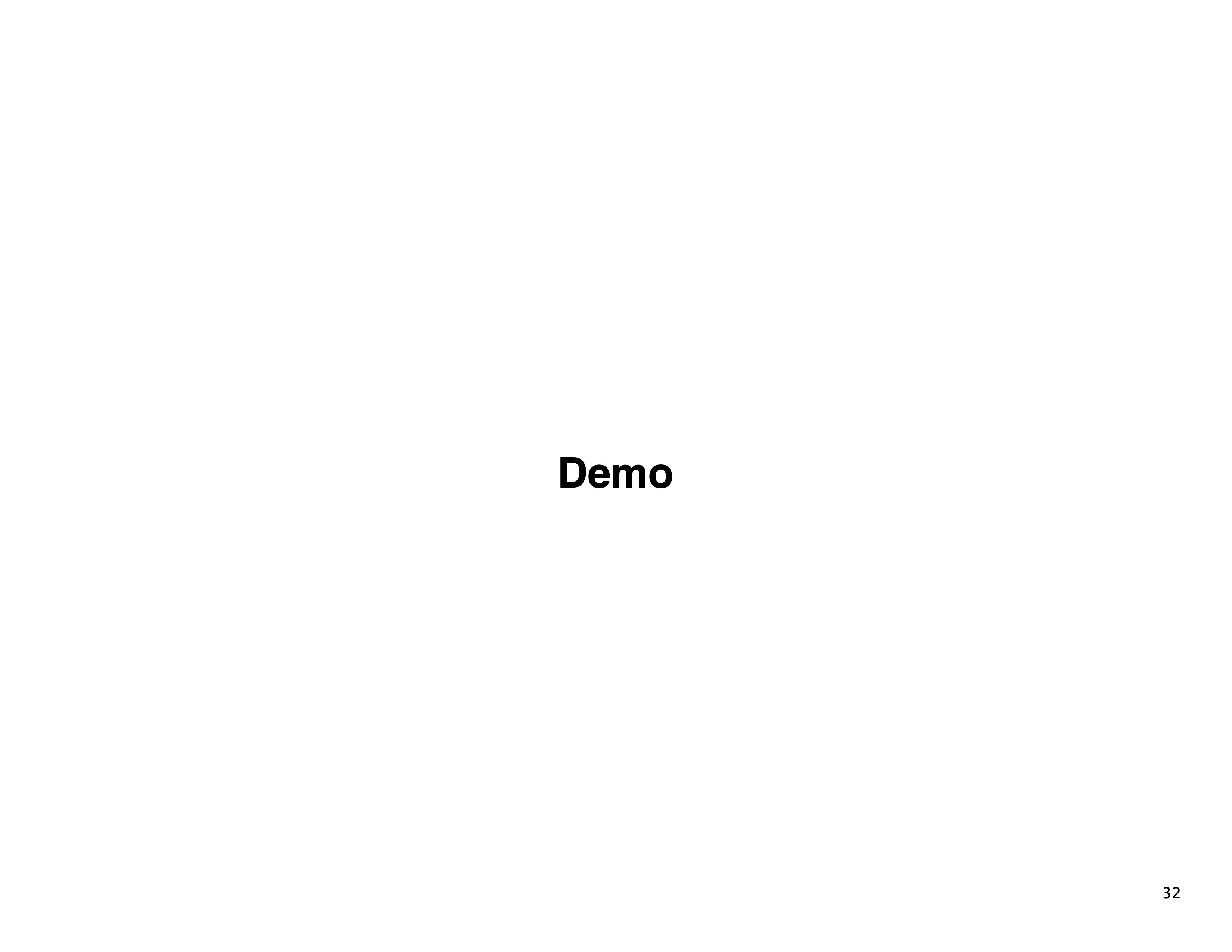 Next, I will live-code a small GUI to give you a feel for what it’s like to use the library in practice.

[No transcript for the demo portion, sorry!] 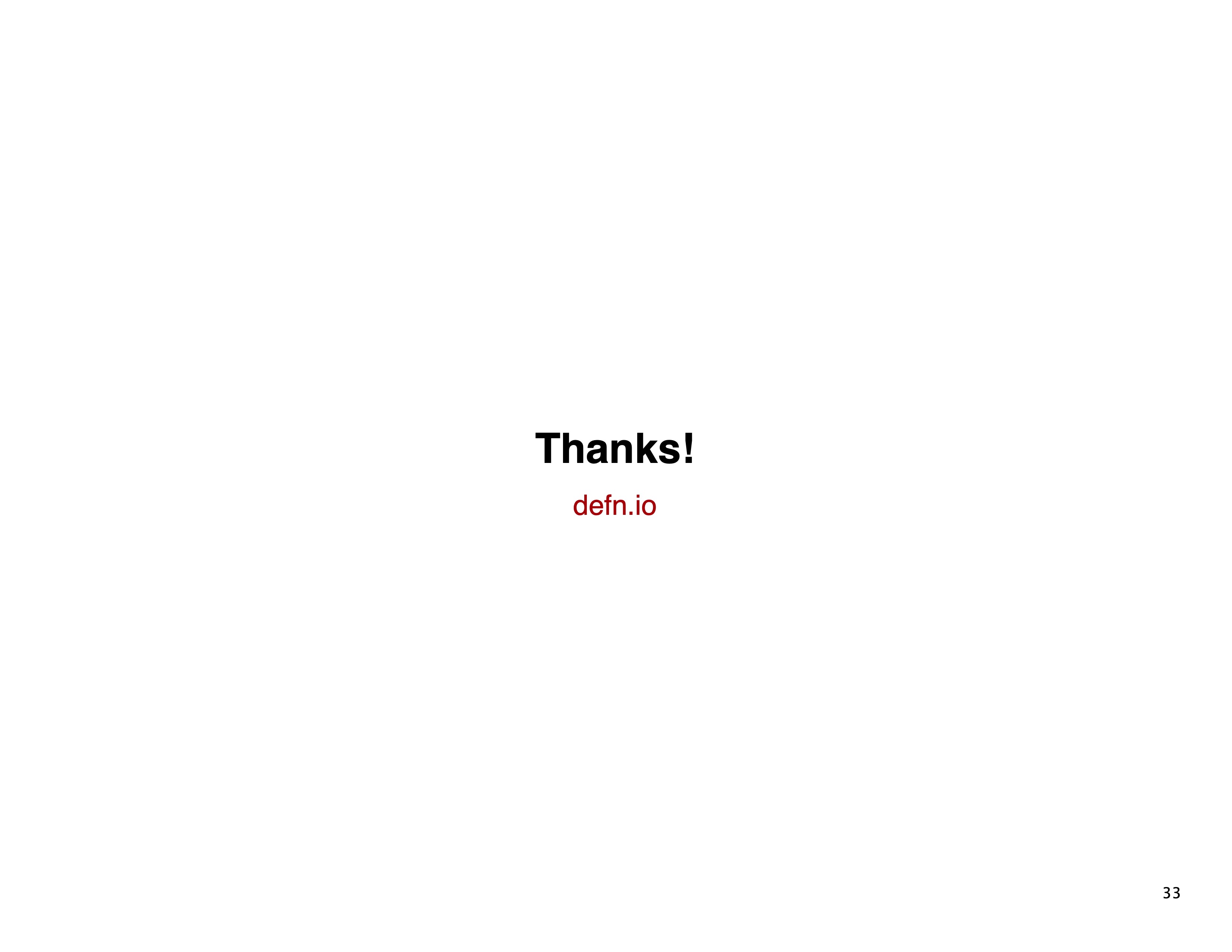 Thank you for attending my talk. The library and its documentation are available on the package server, and you can find the source code on my website at defn.io. Alongside the source code, you will find several example applications, so I encourage you to check those out if gui-easy appeals to you. Thanks!